A Year and a Day follows Robert Allen, reluctant butler to Princess Moraine. Allen spends his time managing the staff, all the while wishing his life was more heroic. When he discovers that his employer is a potential target for The Wild Hunt, it seems he's gotten his wish. But when the skeletal riders of the Hunt arrive, what's a butler to do?

The A Year and a Day comic has been discontinued due to nerve damage in my arm. The series is currently being rewritten as a prose novel.

Code Name: Hunter follows the adventures of Max McConnor and Ruby Pyrenees, two members of the Royal Center of Special Investigations, as they deal with Fey blood oaths, family members, a magical princess, and their toughest adversary of all... diplomacy. 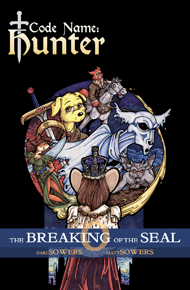 Code Name: Hunter
Volume 0 - The Breaking of the Seal

In which a war occurs, magic returns, and a group of nutters gather together and form an agency.

Ever wondered just how RCSI got its start? Here's your answer! Collected within are the first three issues of Code Name: Hunter documenting the story of Roderick, Merrybell, and the founders of RCSI. 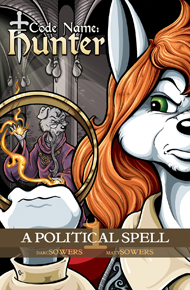 In which Max takes a stab at diplomacy and Ruby complains about fashion.

When the agency finds itself desperate for a mage - their mage having been blown up in a bizarre cursed drum incident - they're left with only one place to turn... the neighboring nation of Astoria. Unfortunately, relations with the Astorian government have been shaky. With an agent missing and a treaty in the balance, Max and Ruby are sent over to act as escorts to the new mage. Only to have someone attempt to kill them!

The more they discover about Astoria, the more they suspect RCSI is hiding something. What's the agency's secret, and just who is the murderous person behind the dark robe? 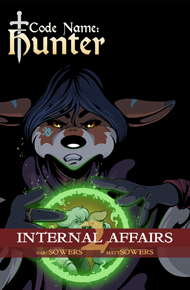 In which Ruby learns a few secrets and Max dances with the fey.

It's a time of revealed secrets. Moraine learns some unsettling facts about RCSI's activities in Astoria, Ruby learns about her parents' relations to Cedric, and Max... learns that his folks still don't understand what his job actually is.

Meanwhile, the Treaty Night with the fey is coming. Has Moraine's insistence on Max being there made him a sitting duck? 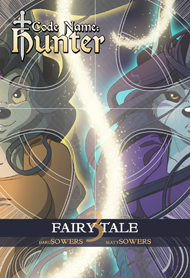 In which Max meets the Founder and Gillian spins a yarn.

A simple courier mission has turned into something more interesting for the tired Max. Not only has he discovered The Lost Squadron, he's located the Founder of RCSI himself - Jacob Roderick, long thought dead!

The story of what happened to Roderick over fifty years ago is finally revealed! 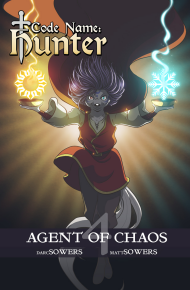 In which Max gets destructive and Puck triggers a trap.

When an agent turns up missing after Treaty Night, a series of events is set in motion. The goal of RCSI... to retrieve Agent Nyx. The goal of Gavin... to complete his blood oath against Max. The goal of Max... to cause as much chaos as possible. As for Puck... he has goals of his own.