World Notes: The Effects of Fey Magic on Mortal Creatures 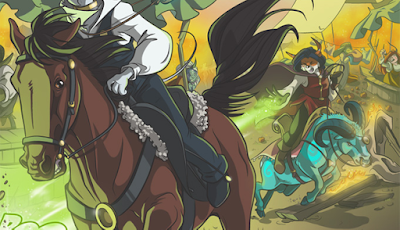 Every now and then a question pops up about why the horses RCSI couriers ride into Fey can return safely to the mortal world. Since horses in the Code Name: Hunter / A Year and a Day world are not considered fully sentient, explaining to a horse that it can’t eat the grass or drink the water won’t work. A horse is hungry, so it eats. It is thirsty, so it drinks. Why then can they return to the mortal world when other characters can’t?

I’m going to try to go over this without getting into too much detail since there’s a risk of giving future points away. Hopefully this will help with some of the confusion.

We’ve talked in the past about the nature of essence - the depth of will-power, personal strength, conviction, love, faith, and fortitude - that determines how much magic a person can create. The higher the level of essence a person possesses, the more magic they can generate. The lower, the less. Every sentient being in the CN:H / AYAD world creates magic. Beings that are considered too low on the sentient scale - creatures like Part (the horse Max rides into Fey), for example - create so little magic that they can consume Fey food and move in and out of the gates with no effects beyond a mild bit of indigestion. At the end of his adventure, Part will be a little gassier than normal for a bit, but that’s all.

So why is this? Simple. What prevents mortals from leaving is the magic of the Fey realm mixing with the mortal’s essence. Fey magic is more aggressive, for lack of a better word, than mortal magic. It tends to wind into a person, seeking out that person’s essence and binding itself to it. Once the Fey magic has become intertwined with the mortal’s essence, the two cannot be separated. The mortal is claimed by Fey and can’t return home. At this point, RCSI hasn’t dedicated much time to discovering workarounds to this beyond the throwing out of random ideas - such as a Fey-locked agent carrying a sack of dirt from the Fey realm with them as they try to walk through a gate. The main reason for this lack of research comes down to a combination of other, more pressing issues and… a general lack of volunteers willing to act as guinea pigs.

This binding between Fey magic and a mortal’s essence happens gradually over a day, becoming fully complete within twenty-four hours. If a mortal consumes Fey food or drink, the binding happens instantaneously. 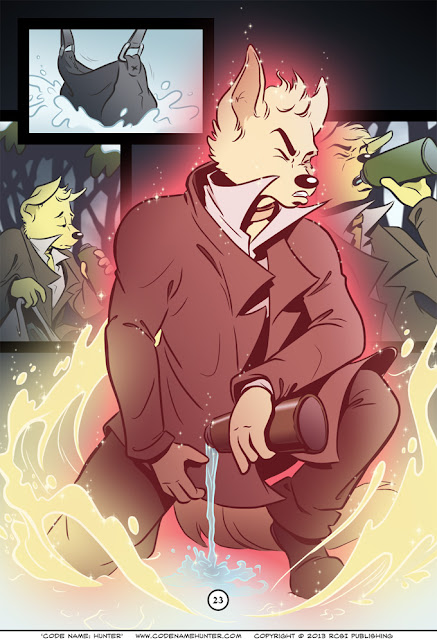 Creatures like Part produce such a minute amount of magic, that any binding which occurs is at so minuscule a level it causes no effects on the organism beyond the slight bellyache and the gassiness previously mentioned.

Does this work the opposite way on the Fey? Yes it does. Fey who spend extended periods of time in the mortal world will eventually find themselves unable to travel back into Fey. Fortunately for the Fey, it takes much longer for the less aggressive mortal magic to intertwine itself completely with a Fey’s essence. As a result, while it takes only twenty-four hours to trap a mortal in Fey, it takes multiple years to trap a Fey in the mortal realm. Fey can also consume mortal food with little fear, as long as they do so in moderation. Most Fey are aware of this danger and don’t linger in the mortal world for long periods of time. The ones that do have decided to make their home in the mortal realm permanently.

Unfortunately, the aggressiveness of Fey magic has an even darker side for mortals. Fey magic can continue to work on a mortal long after that person has left the Fey realm or the Fey who threw the attack has vacated the area. We saw a hint of this back in Issue 1 of the first version of AYAD with Allen’s hand. 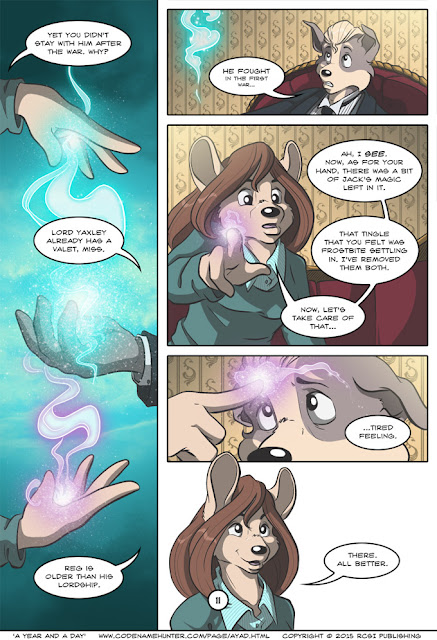 Even though Jack was back in the Fey realm and hours had passed, Allen was still feeling the effects of Jack’s magic. Moraine had to physically remove Jack’s residue magic from Allen’s hand to prevent it from doing Allen any further harm.

The longer Fey magic remains in a person, the more damage it can do. Simply getting out of the Fey realm in time without having eaten or drunk anything may not be enough if the concentration of Fey magical residue is too high. 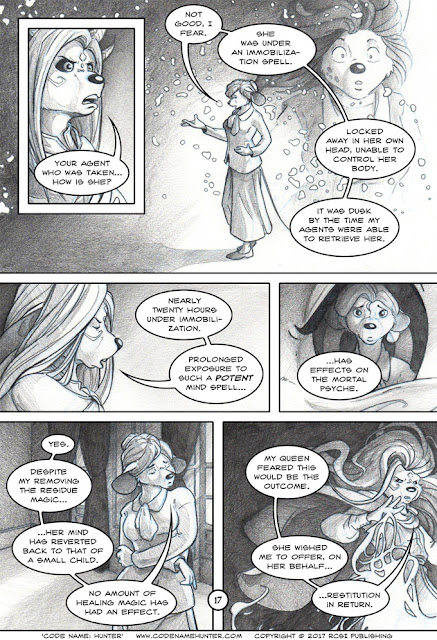 Some in RCSI believe high concentrations of Fey magical residue is the cause behind cases of people dying due to spontaneous combustion, though no clear consensus has been made at this time.
Posted by Darc Sowers at 4:39 PM

In the first version of A Year and a Day, it’s revealed that Emily is a fan of Rosie M. Banks’ books.

So who is Rosie M. Banks? Is she a real author? Well… yes and no.

Rosie M. Banks was originally a character created by P. G. Wodehouse. She’s a romantic novelist whose name first pops up in ’Jeeves Exerts the Old Cerebellum’ and ‘No Wedding Bells for Bingo’. Bertie’s friend, Bingo Little, has fallen for a waitress named Mabel. Bingo knows his father won’t approve of the match since the woman in question is not of the same social standing as Bingo’s family. Jeeves advises Bingo to read Miss Banks’ novels to Bingo's father, claiming that her stories where “marriage with young persons of an inferior social status was held up as both feasible and admirable” will change the elder Mr. Little’s views. Unfortunately for Bingo it works too well. Bingo’s father marries a cook, making him unwilling to increase Bingo’s allowance - an increase Bingo needs in order to marry Mabel.

A few stories later Bingo meets another waitress and marries her. This second waitress turns out to be Rosie M. Banks working incognito to gather material for her latest book.

Bertie calls Rosie’s work, “the most pronounced and widely-read tripe on the market.” When Madeline Bassett gives him a complete synopsis of Mervyn Keene, Clubman in The Mating Season, Bertie says he’s left feeling, “a bit stunned. I had always known in a vague, general way that Mrs Bingo wrote the world’s worse tripe – Bingo generally changes the subject nervously if anyone mentions the little woman’s output – but I had never supposed her capable of bilge like this.”

Wodehouse liked to poke fun at other authors as well as various tropes in his work. It’s believed that the prolific romance novelists Ethel M. Dell and Ruby M. Ayres were the basis for Wodehouse’s Rosie M. Banks character.

In the 1960s a series of novels was published under the pseudonym - with Wodehouse’s permission - of Rosie M. Banks. One of those was Settlement Nurse below. 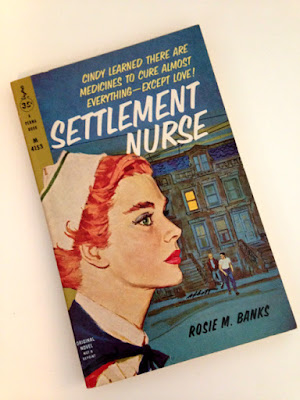 I have actually read Settlement Nurse and found it light, fluffy reading. Not bad, and nowhere near as soppy as the Rosie M. Banks of Wodehouse’s creation is meant to be.
Posted by Darc Sowers at 4:33 PM

Email ThisBlogThis!Share to TwitterShare to FacebookShare to Pinterest
Labels: a year and a day, world notes 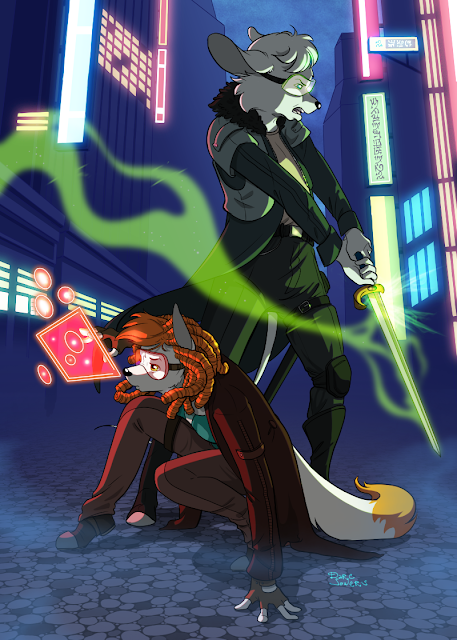 Max and Ruby in a more cyberpunk setting. I hope it turned out well, I've never drawn cyberpunk before. This was a fun experience! Thanks Jaina for the idea!
Posted by Darc Sowers at 5:56 PM No comments: 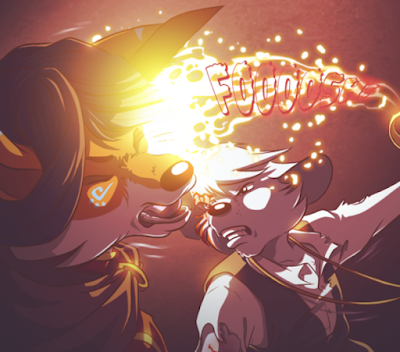 In Issue 24 of Code Name: Hunter, Gavin grabbed Prince Matti and forced Max to accept a favor. Gavin’s end of the bargain was that he’d let the young prince safely go and make sure the kid returned to the mortal world without a scratch. Max’s end of the favor was to remove his RCSI band and leave with Gavin.

Since Max’s acceptance of this favor, there’s been some insistence that there’s a loophole and that either Gavin, or myself, messed up by not spotting. My response to that is… duh!

Any contractual obligation with the Fey - and yes, favors count - contains the possibility of loopholes. Fey love to abuse the letter of the law and ignore the spirit of it. It’s part of what makes them so tricky.

Fey who observe mortals tend to be much more careful about their wording when it comes to favors. They’ve come to realize that mortals are cleverer than was previously thought. Puck learned this thanks to his dealings with Roderick, one of the few mortals who’s ever out-thought him.

Gavin, meanwhile, still thinks of mortals as weak minded and easily led fools. This has a tendency to bite him in the butt.

But Gavin has one major weakness that’s at work here, more than his tendency to underestimate mortals. Gavin, as we’ve proven multiple times in the past, is a hothead. He becomes impulsive and doesn’t stop to think when he’s angry. Max has exploited this a few times already. 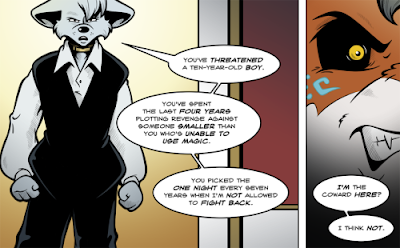 Heck, he even used Gavin’s temper to cause a distraction in the Goblin Market. 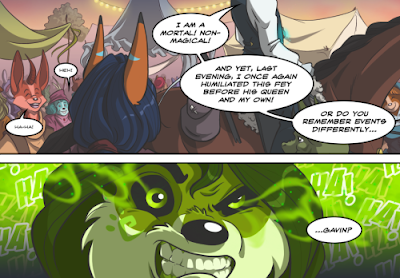 At this point in events Gavin is not thinking clearly. All he sees is a weakened Max and a possible hostage Max is sworn to protect. Easy pickings.

Unfortunately for Gavin, while Max is also a bit of a hothead, he’s capable of remaining cool enough to quickly asses a situation and come up with a possible method for dealing with it. Admittedly, these are not always the best of plans, but he can still find a way around most situations.

The thing I don’t think most folks realize is just where Gavin actually went wrong. Being a little vague about when Max was to leave with him isn’t the real problem. No, Gavin’s main error was in threatening the Prince. 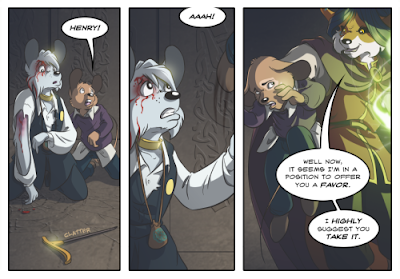 If he’d left the kid alone Max would have, eventually, surrendered. Think about it. Max has been in the Fey realm for almost a full day now without food or water. He’s been up and awake that whole time after being up all the previous day and night. He’s in a lot of pain due to his right arm being broken. This pain is compounded by possible broken ribs. The guy is exhausted. While Max wants to return home, his energy levels are nearly spent. He’s mortal, after all. 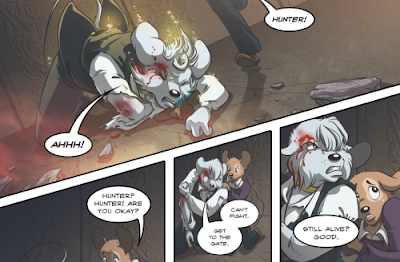 Max going after Gavin now is a last-ditch effort. And all because Gavin made a move against the prince. Max knows the Fey like to abuse loopholes. While Gavin may promise to send the prince home without a scratch, Max knows a cunning Fey could interpret that in many ways. They could wait to send the child home too long past the twenty-four hour period, pop him through a gate which opens all the way across the country, or even send the child home unscratched… yet not breathing. All Gavin said was “I’ll let the princeling here go. Safe, and unharmed. I’ll see he gets back through the gate without a scratch.” There’s plenty of wiggle room for Gavin to safely release the prince - thereby meeting the first of the favor’s requirements - and yet harm the child once he’s released without scratching him.

One of Max’s jobs is protecting Prince Matti. Add to that Max’s general hyper-awareness of danger, and you have a fellow who’s going to plan for the worse in most situations. Heck, he even immediately went to protect the prince once he learned about Ish’s previous brush with a werewolf.

This protective streak of his is why Moraine insisted Max be there during the Treaty Night and specifically be in charge of the young prince’s welfare. She knows Max will do anything to protect the child. Even agreeing to a favor in the desperate hope he can turn the tables on Gavin.

As for whacking Gavin in the face with the RCSI band… that was one of Michael Pyrenees’ favorite moves. If all else fails, use the collar as a weapon.
Posted by Darc Sowers at 4:24 PM