Leystone is still being rebuild during the events of A Year and a Day. The borough was born from the destruction of the East End of London. What once was a thriving area of docks, warehouses, and train yards became a bombed out ruin by the end of the Blitz. Located just east of Victoria Park, the new borough of Leystone is one of the city's many urban renewal projects.

The northern section of Leystone contains buildings that were much less damaged by the Blitz, older brownstones with the occasional modest Victorian home. Southern Leystone, where the destruction was much more extensive, is in the process of being leveled for the construction of council estates.

A large - three stories above, two below - conservatory is scheduled to be erected in 1949. A quarter of the space will be reserved for RCSI use. The remaining seventy-five percent will be dedicated to plots for the use of personal gardens for the residents. Given the nature of the majority of Leystone's inhabitants, RCSI suspects many of these entailment plots will be dedicated to herbs and plants more common in an occult shop than a market.

Moraine and RCSI have extended a welcome to the growing magical population, offering assurance that all beings will be treated as citizens and will have the same rights, as well as be required to follow the same laws, as everyone else. According to RSCI, at least half of Leystone's population is made up of magical creatures of various sorts - lesser Fey of all description, half breeds, succubi, incubi, gargoyles, and various creatures from other cultures. All of the magical residents have registered with RCSI and do their best to live as their neighbors do.

Approximately twenty percent of Leystone's population are considered sensitives. These are mortals with some bit of magical talent. These talents are usually minor, such as speaking to birds or being able to tell which piece of fruit is the freshest. The acceptance of Leystone as a community has drawn them in, and they appreciate living in a place where they aren't considered crazy. The remainder of Leystone's inhabitants are an eclectic mix of general mortals, RCSI agents, and delusional nutjobs.

RCSI is unsure just what has led to the borough being so heavily populated by the more magically inclined. While some believe there may be multiple gates in the area currently undiscovered by RCSI, many suspect it's the Agency itself, as well as Moraine's influence over the rebuild, which is drawing people to live in Leystone.

RCSI offers a form of protection and control that is often lacking in Wildfey, the area of the Fey realm many of the new residents have migrated from. RCSI's commandeering of all the Tube tunnels running through Leystone has led to few general mortals wandering into the borough randomly, giving the community a feeling of closeness and secrecy.

Knowing the effects iron can have on magical beings, Moraine has insisted that all rebuilds in Leystone be as free from iron as possible. While this has delighted many of the new residents, it has frustrated builders and led to the proposed tall tower blocks being replaced by wide, squat designs of at most three stories in height.
Posted by Darc Sowers at 5:22 PM

Email ThisBlogThis!Share to TwitterShare to FacebookShare to Pinterest
Labels: a year and a day, world notes 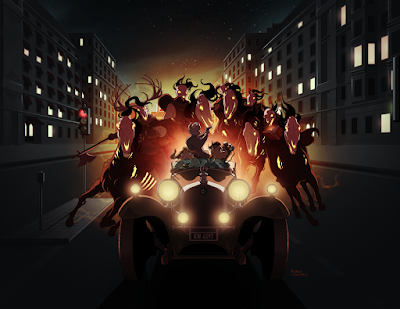 This spread for A Year and a Day Issue 3 kind of got away from me. I was hoping to get an ominous feel here. I'm not quite sure if I quite pulled it off, but I'm still happy with the results.
Posted by Darc Sowers at 5:36 PM No comments: 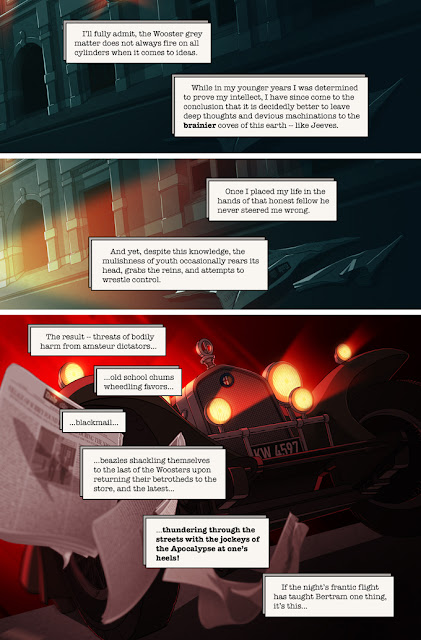 I really like the way the art, as well as Bertie's monologue, turned out on this one.
Posted by Darc Sowers at 5:41 PM No comments: 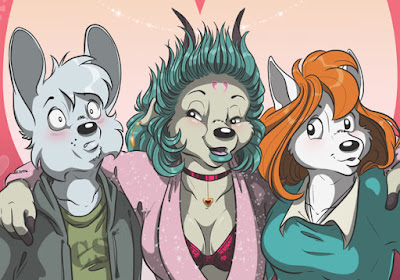 Mercy Mackenzie, Max and Ruby's neighbor, is a succubus. This means she lives off the life force of others, using seduction to gain access to it. So does that mean Mercy kills the people she's intimate with?

While killing ones meal is the typical behavior for a succubus, Mercy chooses not to. This is one of the reasons she's able to live in Leystone and is seen by RCSI as a law-abiding citizen. She follows the rules set up by the agency and limits how much life force she takes from each individual.

She does take a bit each time she's intimate with another, but the amount is low. At most it makes her current partner feel drowsy and a little euphoric. Of course, the euphoria could be from everything else going on at the time. The next morning the person is refreshed and not affected at all, yet Mercy still had her meal and a bit of fun to boot.

While it rarely happens Mercy has occasionally gotten carried away in the moment, shall we say, and taken a little too much at once. While it's still not enough to kill, this can lead to her current partner feeling as if they are under the influence of LSD. In these cases Mercy has been known to rush the person to RCSI Headquarters and straight to the Medical Bay. This is done despite the fact that admitting to having taken more than the regulated amount in one sitting will result in her having to pay a fine and possibly receiving a mark on her record.

Draining a person completely and killing them would mean that Mercy would need to feed less often, maybe once every few months instead of once or twice a week. But she doesn’t mind. Mercy actually enjoys being around others and making them feel good, whether that be emotionally or physically.

Mercy also enjoys baking and likes to infuse her creations with her own special brand of magic.

While she can't induce people to fall in love, her magic can create feelings of lust in others, especially if there's a bit of emotion already there, lurking under the surface. While this may sound hazardous to youngsters, she is careful to keep to RCSI's regulations. The end result, minors are not affected by Mercy's spells, potions, influence, or food. 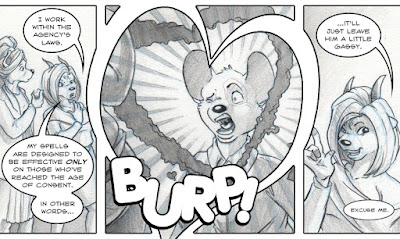 Mercy's proof that a succubus can live among mortals without causing any harm. She's a sweet woman who wants to enjoy life and find her true love. Unfortunately, in her mind, her true love is every man - and more than a few women - who crosses her path.
Posted by Darc Sowers at 5:19 PM