'The Hunt in Piccadilly' 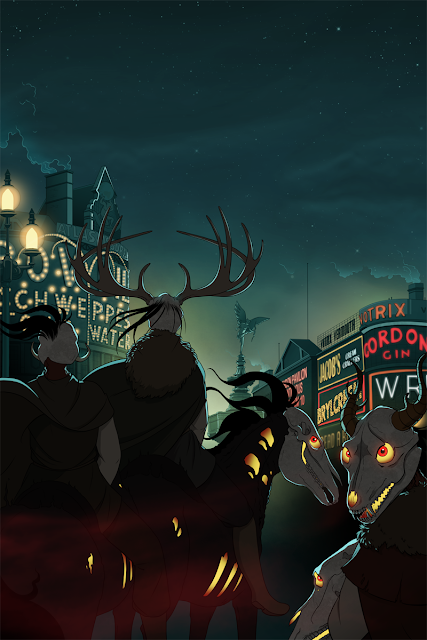 Herne and his Hunt have invaded Piccadilly Circus. I doubt they're there just to see the sights.
Posted by Darc Sowers at 5:48 PM No comments:

Every Greater Fey - a Fey who's a member of an Aspect's court - has one True Name that can give others a measure of control over them. This mainly occurs in the form of granting boons or requests. The level of control depends on the magical strength of the individual in question. The more magical essence the person attempting to use the Name possesses, the more control they can have. 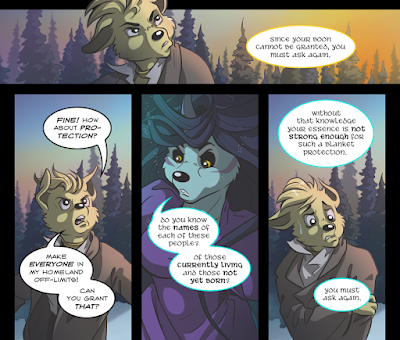 This control is limited to three uses. Once the third boon is granted, a person can no longer control that Fey through its Name. While three boons seems like a deal there is a catch to this... once the third boon is granted the user becomes the property of the individual who told them the Name. Unlike the Name usage, this binding has no limit. And considering that Fey and mortals locked in the Fey Realm are virtually immortal, this is a very high price to pay.

There are ways around this debt if one is underhanded enough. Killing the Fey who told you the Name is always an option, though one that's often tricky to pull off. A cunning mind, meanwhile, may come up with another method of getting out of their debt.

Greater Fey have numerous other names that people refer to them by on a regular basis.

The Queens are often referred to as Summer and Winter, though Titania and Mab are used on occasion as well. Speaking their True Names causes them to appear even after the three uses are up. Since this is something that annoys them, most people who know Summer and Winter's True Names prefer not to speak them.

Puck himself is an old Fey - he’s been around for a long, long time. Like all Greater Fey he has one True Name, thought as far as RCSI can tell no one knows what it is. He goes by many other names beside Puck, some of them include Puca, Robin Goodfellow, Hob, and his female shape, Helena.
Posted by Darc Sowers at 5:16 PM

World Notes: How Big is the Fey Realm? 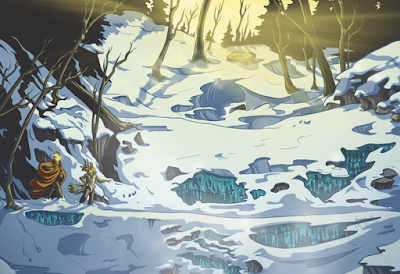 The Fey Realm is actually quite large, most of it uncharted. The gates to the mortal world tend to be close to the Goblin Market, which is itself situated in a strip of neutral ground between the Summerlands and Winterlands. RCSI believes this close proximity is why the lands of Summer, Winter, and the Goblin Market itself occasionally feature in mortal literature. The residents of these areas are the ones most likely to wander through a gate into the Moral Realm.

The Goblin Market has four entrances - two which open out into neutral ground, one which points towards the Summerlands, and one to the Winterlands.

While there are pockets of neutral ground here and there among the lands of Summer and Winter, the majority of the, as far as RCSI knows, neutral land is out beyond these two main Courts. This is where most of the Wild Fey are from.

Unfortunately, the Wild Fey are generally not big on map-making. As a result, RCSI is unsure just how large the Fey Realm truly is. While they're beginning to understand that each Aspect has its own Court and land, RCSI does not have full knowledge of how many Aspects actually exist.

One of Roderick's tasks is to attempt to create a working map of the Fey Realm. This is proving difficult, as the area is too vast for the whole camp to travel together easily and many areas are suspected too dangerous to wander through. The information gathered so far has come from individual agents of The Lost Squadron exploring on their own as well as what's been gathered from friendly Fey.

The rumor that the fey Realm shifts and changes with time is also not helping the map creation any. Occasionally small pockets will plop into and out of the Fey Realm and mortal buildings, such as abandoned churches, may be sucked into Fey. 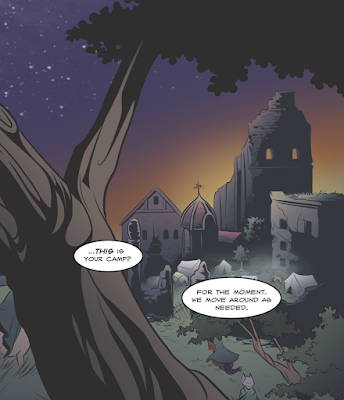 Many in RCSI believe that these fluctuations in the landscape represent subtle power-shifts within the Fey Realm, but without solid proof this remains merely a theory.
Posted by Darc Sowers at 5:13 PM 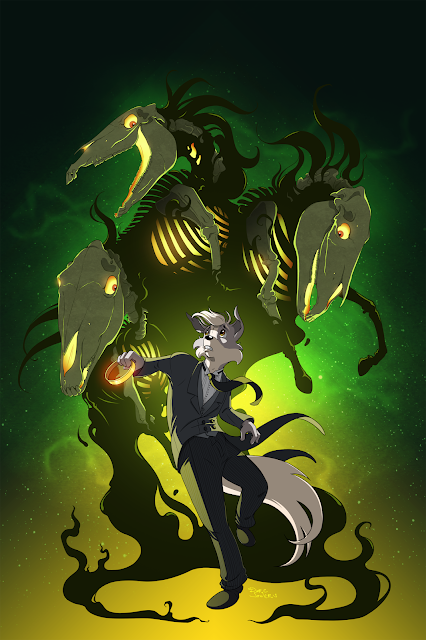 Sometimes when you get a cover idea you just need to sit down and work it up before it slips away on you.

Here's the cover for A Year and a Day Issue 3. It was fun working with so much green. Especially that bright, almost acid-green color. I really like how that turned out.
Posted by Darc Sowers at 5:51 PM No comments: 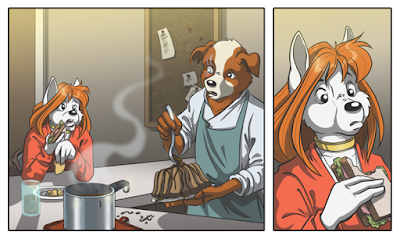 The population of the Code Name: Hunter / A Year and a Day world is made up of a mixture of carnivores, herbivores, and omnivores. With this in mind I occasionally get asked what everyone eats. Is eating meat permitted? What happens in a situation like with Max and Ruby, where a hound is living with a mouse? And what about the Fey? Some of them look like animals that characters eat.

To start off, we have to remember that the Fey are their own type of creature. While they may resemble critters we’re familiar with - pigs, goats, deer, etc. - they’re not actually those species at all. They’re Fey. So their shapes don’t really affect what mortals can and can’t eat.

Mortals do eat meat on occasion, but only certain types. There are no morphed livestock animals. Rule of thumb, if a group is walking about on two legs, talking, and wearing clothing, they're on the “do not eat” list. If a species is not walking around wearing clothing and talking, it’s considered socially acceptable to eat.

That being said, vegetarianism is big. Fish and seafood are a favorite as well. And soy-based meat is very popular. But non-morphed - or base, as it’s often referred to as - animal meat is eaten now and then, mostly by mortals who have a more carnivorous ancestry. For example, Max is more likely to stick with veggies and soy-based meat products. Ruby, due to living with Max, tends to do the same out of courtesy. Sassy, who doesn’t live with someone from a more veggie-based ancestry, will switch between animal meat and soy-based meat as the mood strikes her.

As someone who ate a lot of soy-based meat in college, I can testify that it’s actually very good when done right.

Most livestock is kept for milk, wool, hides, feathers, eggs, transportation, and pets. The animal meat industry, while there, isn’t anywhere near as large as in our world.
Most fur-accented clothing is made of synthetic fur, though older such clothing contains real fur elements. Leather still comes from creatures that are considered base animals and thus free for use. Not everyone agrees with this idea, which has led to the rise of synthetic material mimicking leather for shoes, belts, and such.

Groups like PETA are alive and well in the Code Name: Hunter / A Year and a Day world.

Small lizards and birds are often kept as pets, while larger birds and reptiles may be used as guard animals, seeing eye / service creatures, and, of course, transportation. The reason we haven’t seen many characters with pets yet is because we’ve, for the most part, been focusing on Max and Ruby - RCSI doesn’t allow pets in the flats.

Of course there are cannibals just as there are in our world. They simply aren't talked about in polite society.

So, what do Fey eat? Whatever they want. Who’s going to stop them? I’m certainly not going to!
Posted by Darc Sowers at 5:10 PM