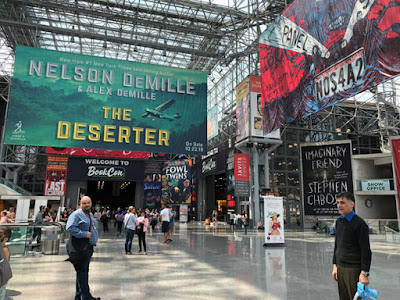 Hey folks! This last Sunday Matt and I caught the train into New York City for a day of book-based excitement. June 1-2 was BookCon out at the Javits Center!

I'd never heard of BookCon until a few weeks ago. I was looking up its big sister con, BookExpo America, which I've wanted to attend for a few years now. Unfortunately, BEA is on Wednesday, Thursday, and Friday. It's also expensive to attend, even with my librarian discount. So, while I could have attended Wednesday, paying an over $100 entry fee as well as around $30 for a round trip train for one day seemed a bit much.

But, my research into BEA lead me to BookCon which was a wonderful compromise! Due to my job we were only able to attend Sunday, something I'm hoping will change next year.

It was an interesting experience! Neither Matt or myself had been to a book con before, so there were many things we were unaware of. Such as the fact that folks start to line up for the Dealer's Den early. 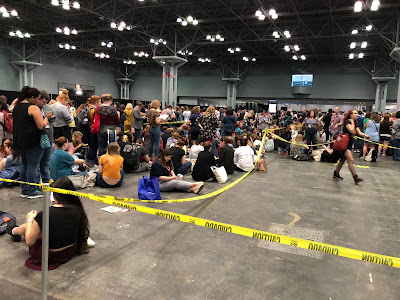 (This is a small section of the line we found ourselves in when we
arrived at around 9:15 or so in the morning.)

We also didn't know that folks will actually run into the Dealer's Den as soon as they're allowed to enter. Not to mention line up in front of the main publishers' booths. This made wandering around difficult for the first hour or two. It also left us very confused.

Eventually we discovered why. We'd gone to one panel and I thought the author's book sounded interesting. But, when we went to the publisher's booth to buy a copy, we discovered they didn't actually have many books for sale. They were focusing more on giving away Galley and ARC copies. Since neither Matt or myself are reviewers or collectors of Galleys and ARCs, I decided to wait until the book comes out this late summer. But, that explains the lines.

There were also massive lines for author signings. In fact, there were many more people than I was expecting. I've heard people claim that books are a waste of time and that the publishing industry is dying. That's a little hard to believe when you're in a massive convention hall packed with frantic book fans. 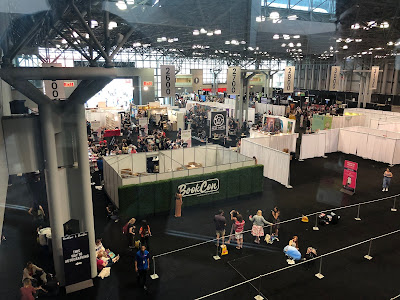 (This was the small, independent booksellers section on Sunday afternoon.
While the main area had calmed down significantly since the morning rush,
it was still hoping. I posted a short video to my Twitter. You can see it here.)

Since I wasn't able to pick up anything from the big name publishers, I focused my attention on the independent authors. My TBR list has increased, though not as much as I was afraid it would. We also attended a few panels, one hosted by Adam Savage and Randall Munroe which, by the time we'd walked the three minutes from the previous panel we'd attended, was standing room only. 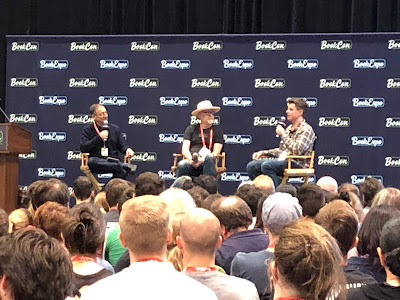 (Stories about science and explosions...)

The most amazing thing to me was the last panel of the day... it was about magic and mayhem in science fiction and fantasy. The amazing thing was... everyone on the panel was a woman! After years of seeing things like 'Women in Comics' panels where there isn't even a single women involved, seeing five women and a trans-woman presenter take center stage made me so happy!

In the end it was refreshing to spend a day surrounded by fellow book lovers. I often get the impression from folks online that I'm some kind of freak because I enjoy reading. It's comforting to know I'm not the only one who's book-mad. Even if I'm not quite hard-core enough to wait two hours in a line for an ARC or an autograph.
Posted by Darc Sowers at 5:47 PM No comments: